What we in Germany call Industry 4.0 seemed to dominate everything. Robert Keane didn’t bemoan the competitive conditions in themselves, but rather put them at the beginning of his presentation in order to illustrate how important it will become for Onlineprint, in a phase of further and ongoing automation, to include and implement topics such as digital transformation and technologies such as big data, robotics and artificial intelligence in its strategic considerations and plans. 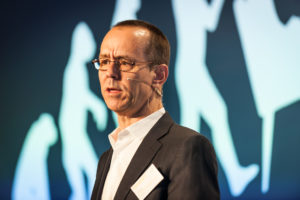 As the founder of Cimpress, Keane has known the industry since 1995, pioneered the online print market, and is determined to continue to do so in the future. With this in mind, Keane explained the long-term strategy of customer-specific mass production, which makes it possible to produce small or individual orders with nearly the same efficiency as mass production. This, however, requires new and intelligent technologies. Robert Keane demonstrated this with a logo, showing that the customer expects that it will look exactly the same in a printed magazine as it does on a ballpoint pen, a polo shirt or in an embroidered version on a bag. At the moment, far too much manual work (artwork) is still required. So, there is (for example) still enormous potential for new and automated technologies and processes in prepress.

This also applies to other areas, since process optimization is unavoidable, especially in the context of the increasingly tough times of online printing. “The entire web-to-print industry is facing a slowdown in growth and we have entered a phase of very tough competition that will separate the long-term winners from everyone else,” warned Robert Keane.